Lack of ovulation or infrequent ovulation may be revealed by an abnormal menstrual history. This would be the only cause of infertility which may be evident without formal testing. Whether it should be treated without proving that sperm are available and the tubes are patent depends on the circumstances. If these tests are not available, a trial of ovulation induction may be indicated.

While pregnancy occurs occasionally among untreated women with oligo-anovulation, induction of ovulation is the usual treatment when they seek medical care. This can be achieved primarily with clomiphene citrate or metformin (Brown, 2009; Johnson, 2011; ASRM, 2006b, National Institute for Health and Clinical Excellence, 2013). Letrozole has been shown to be superior to clomiphene in treating infertile patients with PCOS (Legro, 2014); however, it is not approved in most countries for this purpose.

Clomiphene citrate is taken orally, usually starting on the third to fifth day after the onset of spontaneous or induced menses. The usual dose of clomiphene citrate is 50 mg per day for 5 days. The dose may be increased by 50 mg increments in subsequent cycles until ovulation is induced. Most women ovulate after 50 mg daily (52%) or 100 mg daily (additional 22%); it is unwise to use a higher dosage than 150 mg daily. If there is no ovulatory response after 3 cycles, success is unlikely. For all treated women, the live birth rate within 12 months was 42% and 56% among those who ovulated (Imani et al., 2002; ASRM, 2006b). 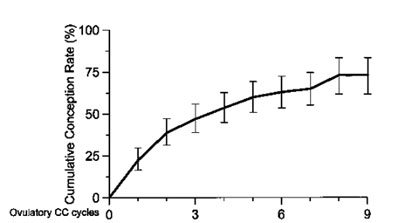 Life-table analysis of conception rates in 160 infertile patients who had ovulated after clomiphene citrate medication for absent or infrequent ovulation. (Imani, et al, 1999).

Clomiphene citrate treatment is an effective treatment. In addition to the uncontrolled studies cited in the previous paragraph, three randomized controlled trials involving 70 clomiphene-treated patients and 63 control women were summarized in a Cochrane review (Brown, 2009). Pregnancy is more than four times more likely in clomiphene-treated patients (rate ratio 4.5, 95% CI 1.4, 14.5) compared with untreated controls. During the three or four months of the studies, there were only two pregnancies in the 63 untreated women (about 3%). The pregnancy rate was 17% (95% CI 6, 28) higher in treated women, which means that treated women had 17% more pregnancies than controls during the average three-to-four month trial. This also means that there was one additional pregnancy for every six patients treated with clomiphene compared with controls during treatment.

The most serious complication of clomiphene citrate treatment is multiple births, which occurs in about 8% of pregnancies arising in clomiphene-treated cycles. While the vast majority are twins, triplet, quadruplet and quintuplet pregnancies may occur less than 1% of the time. Mild ovarian hyperstimulation syndrome (OHSS) with ovarian enlargement and moderate pain is uncommon and severe OHSS with major ovarian enlargement, severe abdominal pain and ascites is extremely rare. Clomiphene treatment does not increase risks of miscarriage or congenital anomalies. The first reports on ovarian cancer risk caused concern, but that has been nullified by more recent reports. (ASRM, 2006b)

Clinicians monitor clomiphene citrate treatment cycles to determine whether ovulation has occurred and to rule out side effects and adverse events, such as OHSS. Where there are more than 3 follicles, each greater than 15 mm in diameter, patients should be warned about the increased risks of multiple pregnancy and be advised to avoid unprotected intercourse. Pregnancy rates and complication rates are unaffected, however, by whether cycles are monitored with basal temperature records, urinary LH, or pelvic ultrasound. Under ideal circumstances, monitoring would include monthly clinical assessments to check menstrual records and document symptoms, as well as regular assessment of serum progesterone and/or use of serial ultrasound to observe follicular changes. Because cycles may not be regular, the likelihood of serum progesterone being mid-luteal can be increased by arranging weekly tests starting two weeks after the last clomiphene pill and continuing until the next menses (ASRM, 2006b). If serum progesterone estimations are not available, however, clomiphene citrate treatment cycles can be monitored by clinical assessment only.

Metformin has been used for ovulation induction, usually for non-obese women with oligo-anovulation due to PCOS. In a meta-analysis of three trials involving 285 women, live birth rates were similar in the groups on metformin and clomiphene citrate (30.3% and 30.8%, respectively) (Johnson, 2011). Metformin dosage is 1,000 to 2,000 mg/day (divided in 2 to 4 doses). Metformin is more expensive and there is a high frequency of severe gastrointestinal side effects such as nausea, vomiting, or diarrhea. Metformin is not, however, associated with multiple pregnancies. In most settings, metformin is reserved for women who prove resistant to clomiphene citrate. With metformin and clomiphene citrate together there are combined costs and complications which are not worth the small added benefit. (ASRM, 2006b) (Sun, 2013) (Legro, 2013)

Letrozole has been shown to be superior to clomiphene in PCOS patients. The usual dose is 2.5 mg by mouth per day for 5 days, starting on cycle 3-7. The dose can be increased to 5 mg if the patient does not respond to the lower dose. (Legro, 2014)

Again, meddlesome activities with other medications or treatments should be avoided unless a diagnosis has been established and there is a reasonable chance of treatment being effective.

Letrozole is effective in infertile patients with PCOS.